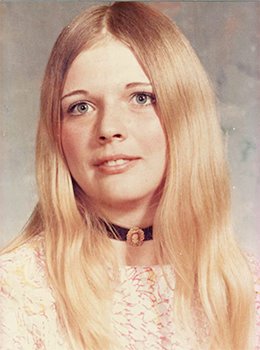 Carole Edwards Allen Collins, 66, passed away suddenly on February 11, 2020 at Foothills Hospital. It was much too soon after a recent stage IV lung cancer diagnosis, which she fought tooth and nail for six weeks. She did not go gentle into that good night; she definitely raged against the dying of the light. In fact, she was surely pissed off when she realized she had lost that battle with earthly death, and likely had some choice words to offer up, as she was “a force” to be reckoned with!

Carola, as she was affectionately called for 25 years by her husband, Robert Collins (aka “Bobby”), is beyond heartbroken by her passing. This tremendous loss has also left the rest of her immediate family in deep sorrow: her two daughters, Carrie Edwards and Amanda Allen, her beloved grandson, Harley Harilstad, her stepson, David Collins, her ‘son-in-love’, Bryn Nunweiler, her ‘best friend-sister-daughter’, Amy Hall, and her devoted rescue Terripoo+ mix, Cooper.

She was predeceased by her father, Clarence Edwards, her mother, Helen Edwards (née Vikse), and her eldest brother, Doug Edwards.

Carole was born in Wetaskiwin on October 3, 1953, but grew up in Calgary, living here most of her life. She was the third oldest of six siblings, and the eldest daughter. Her mettle was forged early on, enduring the crucible of an absent father, a single mother, a meager upbringing, and two adventurous older brothers.

She went to Queen Elizabeth High School, as did her husband yet-to-be, and three generations of her family. It’s quite a tale of past connections and not even “six degrees of separation” from Queen E and Tom’s! She then became an independent teen Mom, which waylaid her education for a time.

Years later, after her second daughter was born and a liberating divorce, she wanted more for her life, so she continued on to Career College, where she received her Legal Administrative Assistant Diploma. Carole came to discover that she didn’t much like working for lawyers, however. So when the opportunity arose, she took on the Office Administrator position for her future husband’s reinvented restaurant, Pizza Bob’s Classic Pie, which was where she spent the remainder of her career.

Carole was a smart and spirited survivor, she had a luxurious head of hair, an enduring sense of playfulness, and a contagious laugh (maybe even a snort or two, and on not-so-rare occasions, laughed so long and hard that the “ugly cry” took over, LOL). Music was a cherished chord that ran throughout her life. She was a lover of Elvis, Country, and the Oldies. When the right songs came on, she could often be seen spontaneously breaking out into song or even a little jig—whether she was standing or seated, it didn’t matter. She was a wonderful cook, and baked the best pies and cinnamon rolls. She was a firm believer in Naturopathy (be damned that 2-pack a day habit). Carole was an avid reader and journaler, she enjoyed her puzzles, playing games, binging shows, hoarding way too much Partylite, and spending time with her family and friends.

Carole was a woman who took more than her share of knocks in life; but she never took them lying down! She was a fighter to anyone who knew her, and she had the voice and the choice vocabulary to go right along with it, which she wasn’t afraid to use! She was a devoted and protective Mama-Bear, and a doting grandma who took on raising her grandson from infancy. Her life was not a simple one, but one that was founded in faith, dominated by resilience, and laboured with love.

In her final days, it meant the world to her that her husband, Bob, was by her bedside every night, and that her younger daughter, Amanda, became her devoted and enduring nursemaid 24/7—right until her last hours on this earth.

There will be a Celebration of Life for Carole on Sunday, February 23/20 from 1-4 pm at Pizza Bob’s Classic Pie, 2610 Kensington Rd NW, Calgary, AB.

May Peace finally be yours, Mom.

Share Your Memory of
Carole
Upload Your Memory View All Memories
Be the first to upload a memory!
Share A Memory
Plant a Tree
Admin Login | Website powered by FuneralTech & TA