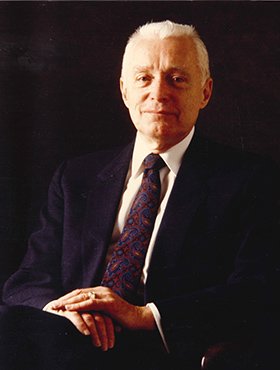 It is with deep sadness that we announce the peaceful passing of John Edwin Goudie on Friday, January 24, 2020 at the age of 95 years.

John was born in Calgary on March 3, 1924 and, other than his time in service with the Royal Canadian Air Force during WWII, had spent his entire life in Calgary. John was predeceased by his wife Audrey in 2014 and by their daughter Adrienne in 1968.

Upon his return to Calgary after the war, he embarked upon a career in the then fledgling natural gas aggregation and pipeline businesses. In this regard he played a significant role in the growth and development of the Alberta & Southern Gas Co. Ltd. and Alberta Natural Gas Company Limited, where he served in the financial and senior management areas, culminating as both President and Board Chair of each.

John was a devoted family man, quiet in his ways, but also a kind, generous and loyal friend to many. He will be remembered for his insightful advice as well as his attention to detail. Art and animals were prominent in both John and Audrey’s lives and they were ardent supporters of both.

Sincere thanks are extended to the many caregivers for their compassionate and loving care of John during his final days.

To send flowers to the family or plant a tree in memory of John Goudie, please visit Tribute Store
Saturday
15
February

Share Your Memory of
John
Upload Your Memory View All Memories
Be the first to upload a memory!
Share A Memory
Send Flowers
Admin Login | Website powered by FuneralTech & TA