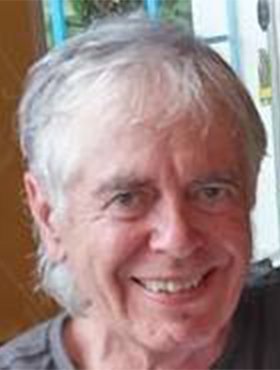 With sadness, we learned Brian slipped away from us in his sleep on November 10, 2019 at the age of 72 years old.

Brian was born in Brandon, MB where he enjoyed childhood in the city and on the nearby family farm.   He was challenged early in life when he contracted polio.  Following his recovery, the family moved to Regina in the mid-1950s, in anticipation of the birth of twin brothers, David and James. Brian attended Central Collegiate and graduated from high school at age 16, before successfully pursuing a BA in political science, at the University of Calgary and the University of Saskatchewan, Regina Campus.  He returned to Calgary where he studied journalism at Mount Royal College.  That career pathway failed to open, so Brian became a management trainee at TD Bank.  Ultimately, Brian established himself as a seismographic data analyst, working nearly 30 years for oil and gas or seismic exploration companies in Calgary and Denver.  Through these experiences he established lifelong friendships and comradery that enriched his life.

Brian was a voracious reader and lover of books, radio programming, music, movies, and sports, a collector of memorabilia, and an observer of human nature.  He was a baseball fanatic who played the game and knew its details well.  He loved visiting the public library, hanging out at the local YMCA, or going to the movie theatre.  Brian served the community as a member of the Boy Scouts movement and as a participant in Youth Parliament. He was knowledgeable and a great conversationalist who enjoyed engaging with others in discussion of current affairs, politics, sports and entertainment.  Although not widely travelled, Brian enjoyed trips throughout Canada, the United States, and Mexico with family, friends, and work colleagues.  He had a love for camping and the great outdoors, spirited card and board games, golf, photography, keeping a family archive, and tending to mixed flowers and the occasional tomato or potato plant, grown on his balcony.  Farmers’ markets or cafes, hardware or antique stores, and museums were a must.

Brian loved the company of, and good times experienced with, his friends and family, including aunts, uncles, and cousins.  He maintained contact with his stepdaughter Naomi, through the years and with his brother David, he shared a special bond.

For the longest time, Brian endured significant health challenges that prompted early retirement.  Collectively, they took a heavy emotional and physical toll and proved difficult to cope with. This summer and fall were largely spent in hospital.  But following expert care of health professionals and with the support of friends and family ,Brian was able to return home where he spent his final weeks. He struggled and emerged, and to a certain extent, defied the odds.  He went to bed early after a day of great conversation, good food, and even a little dancing. He was like his old self. He couldn’t be awoken for coffee next morning. It was the ending he would have wanted.

Brian was predeceased by his parents Arnold (“Chub”) and Vera

Brian’s family wish to extend thanks to the doctors, nurses and staff at the South Health Campus, Tom Baker Cancer Centre, and the Peter Lougheed Centre for their excellent care.  A special thank you to Meera, his public health nurse manager. Thank you to Dr. Peter Thornton for caring for Brian over the years. A tip of the hat brim and “Much Obliged” to friends who provided ongoing support.

Brian expressed no desire for a funeral service. He preferred that he be remembered by family and friends in their own way, in their own time.

To send flowers to the family of Brian Ansley, please visit Tribute Store

Share Your Memory of
Brian
Upload Your Memory View All Memories
Be the first to upload a memory!
Share A Memory
Send Flowers
Admin Login | Website powered by FuneralTech & TA