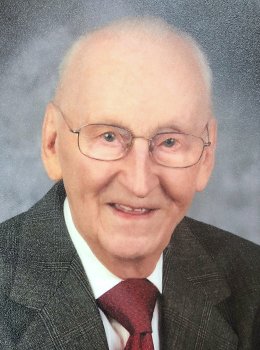 Robert Treacy, beloved husband of the Late Grace (nee Cole) of Calgary, passed away on Saturday, October 19, 2019 at the age of 96 years.

Robert was one of nine children born on a farm near Hussar, Alberta to Willard and Lily Treacy. Robert served in the Royal Canadian Air Force before attending the University of Toronto, graduating with a degree in Electrical Engineering.

Robert married Grace Cole and they enjoyed many adventures over their sixty years of marriage.

Robert’s geophysical career in the Oil and Gas industry would last over thirty years working for major and independent companies. He also co-owned a Canadian geophysical ship off the east coast of Canada.

In Robert’s spare time, he found time to illustrate a book on historical homes of Calgary, contribute illustrations for a book published by the Foothills Historical Society, write poetry and music, as well as create many works of art on paper and canvas.

Robert and Grace moved to Bragg Creek in 1974 where they became active community members. Robert was a founding member of the Bragg Creek Artisans and Bragg Creek Painters. Robert enjoyed a diverse and exciting retirement. He was on the Board of the Alberta Art Foundation and volunteered for many years with the Calgary Stampede Western Showcase Art Gallery. In addition, he continued to create his own large body of art.

In 2012, Grace passed away and Robert moved to Manor Village at Signature Park in Calgary where he continued to share his love of the arts with his fellow residents and staff.

Robert’s family wishes to thank the staff at the Manor Village at Signature Park, the doctors and caregivers at the Rockyview General Hospital Unit 71, and the staff at Southwood Hospice.

Share Your Memory of
Robert
Upload Your Memory View All Memories
Be the first to upload a memory!
Share A Memory
Send Flowers
Admin Login | Website powered by FuneralTech & TA