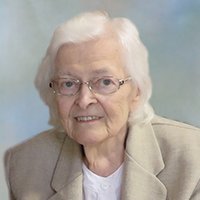 Joan Smode, beloved wife of the late Adi Smode of Calgary, AB, passed away peacefully on September 27, 2019 at the age of 87.

Joan was born in New York, but the family returned to London when she was three years old. She excelled in school, graduating from university with a major in mathematics and receiving her diploma from The Queen Mother. Joan came to Canada in the early 1950s, in time settling on the West Coast. It was there that she met her future husband, Adolf (Adi) Smode, on the beach in Bamfield, BC.

Joan became an early pioneer of IT with her position as a Systems Analyst with IBM. Amongst her achievements was the first use of computers in early forecasting the outcome of the 1958 Canadian National Election. After taking time to start a family, Joan returned to her profession as an IT Consultant. In time, she established her own company, JES Library Automation, which developed and supported computer systems for all aspects of library operations in public and academic libraries across North America. Joan loved to travel, and with her husband, explored many corners of the world including trips all around Europe, Russia, the Crimea, Kenya, Mexico, the South Pacific, and all over North America.

Joan is survived by her sons Peter and Mark (Sasha) Smode, her brother Harry Reading, her sister Janice Minter, her four grandchildren and her niece and nephews.

Joan was predeceased by Adi, her loving husband of 55 years, and her parents Johanna and Harry Leonard Reading.

A private memorial gathering will be held.

Share Your Memory of
Joan
Upload Your Memory View All Memories
Be the first to upload a memory!
Share A Memory
Plant a Tree
Admin Login | Website powered by FuneralTech & TA