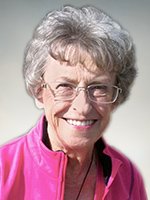 Nonie Miller (nee Laughlin), beloved wife of the late Donald Miller of Grand Prairie, passed away on Tuesday September 24, 2019 at the age of 83 years.

Nonie was born in Hanna, Alberta on August 28, 1936. Following the railways, Nonie lived in many grain elevator towns throughout Saskatchewan and Alberta. She met her high school sweetheart, Don, in Grande Prairie and they eventually married in Calgary in 1958. As the wife of a salesman, Nonie endured frequent transfers to various cities throughout Canada. From Calgary, AB to Regina, SK then St. John’s, NL, her family finally settled in Edmonton, AB. Each city had a special place in Nonie’s heart, especially for the cherished friendships she developed along the way. After raising three rambunctious children, Nonie returned to school and graduated with distinction from the University of Alberta with a Bachelor of Education in 1976. She was hired at Richard Secord Elementary, in Edmonton, teaching mostly Grades 2 and 3, where she worked until her retirement in 1996. Nonie's passion for teaching and her generous spirit was evident throughout her career. She spent time outside of the classroom attending her students' events, cheering them on; she spent her own money to ensure every student had the necessary supplies to be successful; and many a day was devoted each school year to preparing thorough, thoughtful, and praise-filled report cards.  Nonie's dedication was rewarded by many cherished hugs from students and parents alike.

Nonie was predeceased by her husband, Don in 2009; her parents, Lillian and Ray Laughlin; her sister, Dixie Leurer.

The family would like to extend special thanks to all the staff at The Manor Village at Fish Creek Park for all their compassionate care given to Nonie during her residency. We are so very grateful to  Dr. Poothencheri, all the PCAs, LPNs, and the Palliative Care Team consisting of Helen, Sarah and Dr. Foster .

In lieu of flowers and in memory of Nonie, remember to smile at someone each day. It is the shortest distance between two people. It costs nothing and is worth everything!

To send flowers to the family or plant a tree in memory of Winona (Nonie) Miller, please visit Tribute Store
Saturday
5
October

Share Your Memory of
Winona (Nonie)
Upload Your Memory View All Memories
Be the first to upload a memory!
Share A Memory
Send Flowers
Admin Login | Website powered by FuneralTech & TA