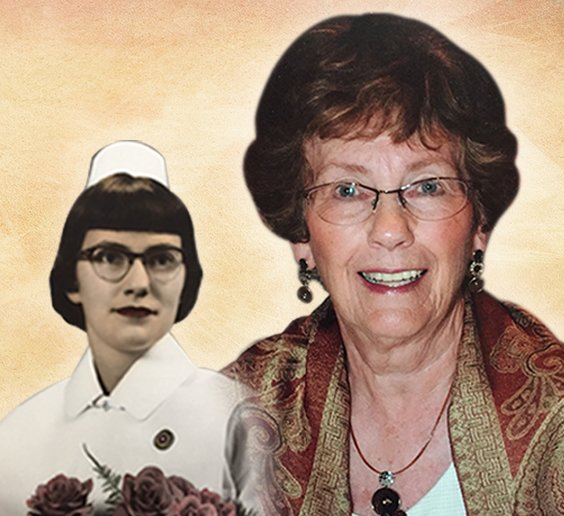 It is with heavy hearts that we announce the passing of our Mom and Gramma, Donna Rosamond McCormick (nee Young), on Tuesday, August 6, 2019.

Donna was born March 22, 1932 in Newdale, MB to the late Os and Millie Young. Donna was raised on the family farm and left for Winnipeg to study Nursing at Victoria General, graduating in 1953. She was a well-accomplished nurse who came to specialize in geriatric care. She had a keen mind for learning with exceptional attention to detail. Her career took her to Montreal, Winnipeg, Kenora, Dauphin, and Calgary. She progressed to a supervisory role and was held in high regard.  Donna made life-long friends with several of her nursing classmates and colleagues, who would later become her travelling companions.

Donna had an endless supply of energy and was often referred to as the “Energizer Bunny”. She and her husband Terry raised four children, Cathie (Brock), Kerry, Shawn, and Chris (Dianne); worked full time, and dabbled in several small businesses as well. A consummate sales lady, her family and friends heard many pitches of her latest products.

She had a passion for the family cottage at Coney Island, Lake of the Woods, where she spent many summers pursuing her love of gardening, improvement projects, spending time with her beloved granddaughter Allison, hosting friends and family, as well as competing with her sister-in-law Janice, collecting doilies. She loved travelling; her adventures took her to Hawaii, hosteling and backpacking in Australia, New Zealand, Greece, England, Scotland, Ireland, Ecuador, Panama, Mexico, all across Canada, as well as several cruises. She was generous with her time, giving back through canvassing for Heart & Stroke Foundation and Cancer Society; she was the top canvasser for her neighbourhood.

Donna was predeceased by her son Shawn in 1983 and her husband Terry in 1997.

Funeral Services will be held at CALGARY CREMATORIUM CHAPEL, 3219 – 4th Street NW, (within the valley of Queen’s Park Cemetery) on Friday, September 27, 2019 at 2:00 p.m. Reception to follow at the funeral home. A Graveside Service will take place at a future date at the Newdale Cemetery where she will be interred next to her beloved son Shawn and husband Terry. A gathering of family and friends in the Newdale area will be held in the spring.

The family would like to thank the staff at Bethany Care NW with special mention of Shirley, her unit RN, for the wonderful care our mother received. The family is also very grateful of our mother’s neighbours, Colin and Kathy, who helped make it possible for Donna to remain in her home as long as she did.