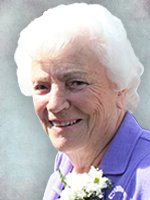 It is with deep sadness we announce that Margaret “Pauline” Palmer (nee McShane), our dear wife, mother, grandmother, and great-grandmother, passed away peacefully surrounded by her family on Thursday, April 25, 2019 at the age of 82 years.

Pauline was born in Londonderry, Northern Ireland on June 22, 1936 to parents John and Margaret, and was raised with her three sisters and three brothers.  After marrying the love of her life, Robert (Bob), in Derry in 1961, they moved around the world, settling in Canada in 1969. While Pauline lived in Canada for fifty years, she always called Ireland home. After setting new standards working in a shirt factory, once married and a mother, Pauline was dedicated to raising her two girls. Pauline continued her attention to detail for the rest of her working life and beyond, as a well-respected and trusted inventory clerk for many years and then mastering the fine art of paper tole in her retirement. She has left many great works from her new found talent.

Pauline will be sorely missed by her devoted husband, Robert; her daughters, Theresa (Chris) and Sharon (J.B.); grandchildren, Melissa (Jesse), Adam, Meg, and Evan; and great-grandchildren, Carter and Max, as well as many nieces and nephews in Ireland and in Canada. Pauline will also be missed by her beloved Dixie, her canine companion in her last years.

Pauline is predeceased by her parents, John and Margaret McShane; her sisters, Una, Maureen, and Phena; and her brothers, Peter, John, and William.

If friends so desire, memorial tributes may be made directly to The Alzheimer Society of Alberta and the Northwest Territories, Administrative Office, 10531 Kingsway Avenue, Edmonton AB T5H 4K1.  Tel: (1-866) 950-5465, www.alzheimer.ab.ca.

We are grateful that Pauline, with the support of her loving husband Robert, was able to live at home as her Alzheimer’s disease continued to progress. We thank Melanie, Sudesh and Angelica for their friendship and support. We would also like to thank Nishel and the staff at Pauline’s day program, Club 36. She so enjoyed going there. Many thanks to the Unit 32 nursing staff at Foothills Hospital for their impeccable and compassionate care in Pauline’s last days.

Share Your Memory of
Pauline
Upload Your Memory View All Memories
Be the first to upload a memory!
Admin Login | Website powered by FuneralTech & TA