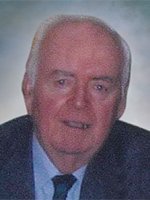 William “Bill” Baillie, beloved husband of Dorothy, passed away peacefully, on Friday, December 21 at the Calgary Foothills Hospital with his wife at his side.

Bill graduated from McMaster University with an Honours Bachelor of Science Degree in Geology.  He enjoyed a long career in the oil and gas industry as an exploration geologist which fueled his passion for the mountains and skiing.

He was an avid sports enthusiast and fan, playing basketball in university, working tirelessly at ski races, and coaching numerous community soccer teams.

Bill was a devoted family man and was always there to support his children and grand children in their many endeavors and activities.

Bill will be dearly missed by his wife of 61 years, Dorothy; his son, Brian (Joanne); daughter, Kathy; son, Scott (Sharla); nine grandchildren; and one great-grandchild.

A celebration of life will be held at a later date.

In lieu of flowers, memorial tributes can be made in Bill’s name to a charity of your choice.

To send flowers to the family of William BAILLIE, please visit Tribute Store

Share Your Memory of
William
Upload Your Memory View All Memories
Be the first to upload a memory!
Share A Memory
Send Flowers
Admin Login | Website powered by FuneralTech & TA