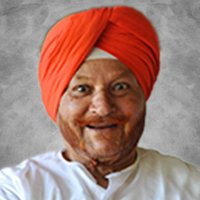 Jhanda Singh Boparai, beloved husband of Pritpal Kaur Boparai (nee Chahal) of Calgary, passed away on Saturday, January 9, 2021 at the age of 87 years.

Jhanda accomplished much through his life spanning 9 decades and two continents. He spent the first half of his life in Punjab, India where he joined Punjab Police in 1951 and married his beloved wife Pritpal Kaur in 1955. Together they immigrated to Calgary, Alberta in 1989 due to political unrest.

In his younger years he was a star soccer player and was recruited by a high school to play for them. After high school, he served in Punjab Police for almost 40 years, taking early retirement as Deputy Superintendent of Police (DSP). He was proud of maintaining law and order in the various cities and towns he was stationed in. In particular, he often shared stories about how he had solved every murder case he was assigned and caught robbers and drug traffickers regularly, while putting his own life at risk.  When in Calgary, he had one motto “When in Rome, do as the Romans do”, and so adjusted quickly to his new life. He began working as a security guard in Deer Valley Mall which he took very seriously. There he earned much respect for employing his old-fashioned policing tactics to keep troublemakers out of the mall. Jhanda went above and beyond to help others including his family, friends, and colleagues as well as anyone he crossed paths with.

Family was very important to Jhanda. He was very proud of his six daughters for building successful lives in different parts of the world. Jhanda never missed an opportunity to brag about his bright grand-kids who are doctors, pharmacists, public servants, computer scientists, and small-business owners.

Jhanda’s most memorable vacation was stopping at a beach house in Oregon during a summer road trip. In the last year and a half, he vacationed one last time in Toronto for his 86th birthday celebrations with family and to attend his grandsons’ weddings. During that trip he shared that he felt very blessed that god had given him such a big family and that his heart was full of happiness because all his kids are well-settled. He was also able to fulfill his last bucket list item to go back to his home in India and visit the Golden Temple.

He enjoyed following politics, watching sports with his grandkids, gardening, food and spirits, spending time with family and friends, and the finer things in life (clothes, watches, perfumes).

Jhanda’s favourite sayings were “Chardi Kala” (important expression used in Sikhism for a mind frame - ever optimistic attitude) and “Bago Baag” (full of joy) when asked how he was doing.

He will be most remembered for his “taur”, a handsome, warm, positive, and genuine demeanour and personality, and for sharing many interesting stories of his adventurous life. He also had a soft heart and was much loved by his grandchildren who call him Teddy Bear. He left his family and friends with many loving memories.

Funeral Services will be held at CALGARY CREMATORIUM CHAPEL, 3219 – 4th Street NW, (within the valley of Queen’s Park Cemetery) on Saturday, January 16, 2021 at 2:00 p.m  for 10 attendees in person.  All others are invited to join Mr. Boparai’s service streamed live at https://vimeo.com/event/609920. on the day of the service. Condolences, memories and photos can also be shared and viewed here.

A Sehaj Path (Prayer) is underway at the Sikh Society of Calgary Gurudwara, 739 – 81st Street, SW Calgary. Family and Friends are encouraged to go to the Gurudwara to Matha Tek (Pray) at a time convenient for them following the Alberta Health guidelines.

In lieu of flowers, donations may be made in memory to Alberta Cancer Foundation in Care of Tom Baker Cancer Centre.

Please indicate the donation is in memory of Jhanda S. Boparai who passed away on January 9, 2021.