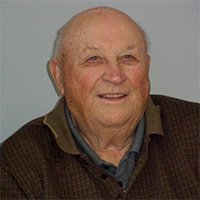 Donald Evans, beloved husband of the Late Patricia of Calgary, passed away on Monday, December 7, 2020 at the age of 92 years.

Don was born to Courtenay and Anna Evans (nee Smith) in Lawson, Saskatchewan on August 27, 1928 and was the older of twin boys (brother, Ronald), joining John ad Fred to complete the family.

Don joined the Navy in the late 1940’s and when he got out in the early 1950’s he returned to the workforce in Calgary, where he met his future wife, Patricia (nee Dimma), and they were married on September 12, 1952. Don went to work in the oilfields in Northern Alberta and British Columbia. Afterward, he joined the Alberta Wheat Pool, where he received his journeyman papers as a carpenter. He then went to work in the oilfield again, building compressor stations across Canada.

In February 1962, Don moved his family to Phoenix, Arizona until mid 1964 when he moved to Huntington Beach, California. It was at this time that he decided to farm the original farmstead, which he bought from his parents and moved there in April 1965. He farmed until the spring of 1979, when he sold and moved to Saskatoon. At this time, he started a construction company with his son, Gary (Devanson Construction) until the fall of 1984 when he shut down the company because of the economy. He then bought a cab franchise and drove until the early 1990’s when he retired for good. Don and Pat enjoyed many trips to the Southern States for the winters, particularly Yuma, Arizona.

Don was predeceased by his wife, Patricia in December 2009 to Alzheimers; as well as his brothers.

No funeral service will take place, as per Don’s wishes.