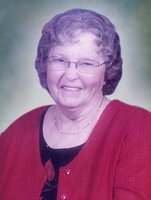 Marjory Ibach (nee Brown) beloved wife of the late Kilian “Butch” Ibach of Calgary, passed away on Monday, April 6, 2020 at the age of 86 years.

Marj worked 27 years for the CBE as a cleaner. She was also a member of the Catholic Women’s League.

She was also survived by her sister Nora Mc Ilvena, brothers Alex, Doug, Bob (Joy) Brown and special niece Noreen (John) Buckley as well as sisters-in-laws, brothers-in-laws, and many nieces and nephews.

The family would like to thank all the wonderful staff at the Chinook Hospice on Glenmore Trail SW, for their loving and compassionate care of Marj in the last six weeks of her life.