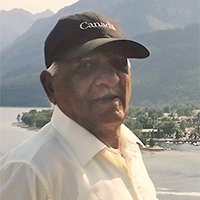 Kuldeepak Chand Bali beloved husband of the late Sudershan Kalia of India, passed away on Tuesday, November 12, 2019 at the age of 89 years.

Raj, as he  was lovingly known, he was born in Varanasi in 1930 where he established his business and later, moved to Canada after retirement. At the age of 24, he married the love of his life, and spent his time in devotion to his wife Sudarshan, until her passing in 2002. He has made an impact not only on his five children and his seven grandchildren but also on everyone that he has been around. His infectious laughter and his profound conversations have had a lasting impact on everyone’s lives who, he has come across. Our papa ji was the most resilient and level headed person that we have ever had the privilege to know. His feet never hit the ground, as his love for traveling has trickled down into the next generations.

The family would like to give their  sincerest thank you to Unit 48 and 49 at the Peter Lougheed Centre especially Khalil, Jeff and the entire staff for the tireless hours spent helping him through his journey forward to his beloved Sudarshan.